Tere!
Tons of sweat. ..That’s how I could describe our 2,5 weeks trainingcamp in Otepää, Estonia! Temperature didn’t go under +22c, not even during the nights. so hot!! If I had holidays it would have been fun and nice B) , but as a sportler it was a bit tuffer.. even too hot! Sometimes my cheeks white I wished I was swimming already in the lake.. eh.

Liquids, liquids.. and shelter! That’s what we did between the trainings. Otherwise we didn’t need shirts to wear in the trainings, nor the others.^^’ that made landscapes even better, though.. and you know what I mean!:P At the same time there were both russian biathlon teams, ukraine team, estonian team, some other russian teams etc..
Sometimes it brought some problems how to get some shootingplaces, as the priority lay on the a-teams… Anyways, I must consider that AGAIN Otepää trainingcamp was the highpoint of the summer and summertraining. I feel comfortable there, and I think the surrounding and trainingconditions are so perfect! And living next to shooting range… both thumbs up:)))

This time we didn’t get the good advice from our headcoach Anatoly, as he was so eagerly working with rus a-team. Our two ”advicers” here couldn’t fill A’s place, unfortunately. One of them (fater of two boys in the team) could organize trainingfacilities and so on, otherwise his knowledge about the coaching couldn’t improve the quality of the trainings!. What comes to this new, young x-c coach.. He flew to some own races to Lappland during the camp, returned back in a high fewer and after that he was only chilling the rest of the camp. Great, isn’t it?:D Unfortunately our youngest got sick (maybe due to this ”new coach) during the second week, and also my roommate Sarkku just in the end of the camp. In this heat fever and throwing out aren’t nice..^//

so Help help.. It doesn’t seem so bright over here. But living with the facts… AND luckily we have done the same kind of program already 4 years (okey for me only two cause of my sweden year:)) so we already know how it should be done…! I hope that the things will be better during the autumn and this was only hesitated conclusion about the new system..

So 7th time in Otepää, not the best but otherwise as precious as the previous years!:) And after three years the Estonian Rally event entered the city, filling the streets during the first weekend. and also blocking the streets and preventing us from rollerskiing on the new shootingrange area! damn. Somehow I managed to get us VIP-tickets, trying the rallycar.. and you name it!:D hilarious:)) and not forgetting to mention my friends from Saalfelden!! Dankeeee, war echt supa!:) 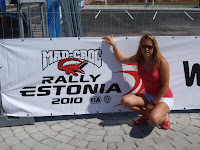 Anyways we got this all through and came back home, only to feel the same heat!
Now it’s been time to chill out, celebrate my birthday (yes, I’m one year wiser..:D) and then welcome August and the new challenges.

Next stop Lahti and Finnish Champs in cross-biathlon. Then I’ll head to dear Östersund! 8 days trainingcamp and the IBU-rollerski cup.. that’s the plan and that’s what I’m eagerly waiting for!:)) let’s check the situation..

Now time for European Champs and Barcelona in my sight! ..Thorkildsen.. *gg* 😛

ps. I got now a new bike after the accident!!! 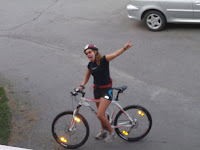