First of May and time to update! World Champs had just the first race in Ruhpolding. Big congrats to Slovenia! It was a great surprise:) Also warm congrats to other medalists. Let’s see how the queen of biathlon, Lena, will survive catching still 5 golds right?:D I’m also really happy to see my little brother to perform on the excellent level, today’s relay was a magnificent! Hiphiphurra!

What about me? I told last time about the European Championships trip, how we three athletes from Finland decided to travel to Osrblie without a coach or waxmen or service.. or even car! Considering these facts we actually did quite well, even the results were pure bullshit.
I’m really grateful to the teams helping us. Thanks to Swiss, Austrian, Estonian, Bulgarian and Russian waxmen and coaches helping me and the boys on the range, or waxing skis and all about that! And our super privet shuttle driver, with whom I discussed only in Russian:D D’akujem!

Sprint I managed to drop again all the prone targets but was too slow on the standing stage and even dropped only three of them. Place 44 to the pursuit didn’t really astonish. Only the sun was shining and I was glad. I didn’t like the track either. With extremely cold temperatures and steep two big upphills within the first 1.5K was killing…

I had never quit a race, means I’ve always come to the finish. So I decided before pursuit that I will manage it. Coming to the 3 shooting I realized Pidrushina was already arriving just behind me. I missed one, but luckily she 2! So I had around 1 penaltyloop advance… So the second last lap was my ”final” lap, skied as fast I could and luckily reached the shooting range before the winner crossed the finish line! So with breath-taking feeling and shaking legs I managed to hit 2 targets. How great^^D ending up to the place 40. plaah.
After lame athlete’s party we had still individual races to go. The Finnboys were lame too, as did I. One miss in the prone stage destroyed my zero shootings in the prone, and one misslucky first standing ruined my race. No other comments; except it was cold and sunny and we had a great flat to live and cook! 😀 So we finally flew back home, with Malevian Airways who was co-operating with Finnair.
They had never heard about skies or rifles to pay separate, so we got a amount of 60000 local money payment, app 220euros just to get back home. Ironically this aircraft just bankrupted day after our arrival home.

At home was bittercold -30 degrees cold weather and my boyfriend, arrived from three-weeks-vacation in Thailand!

And so I caught cold and didn’t really train for days. I was gathering my friends to work in World Cup together with Chief of Attachees, Sampo:D After all I didn’t think I had some chance to compete there although I knew I would be the first to replace or maybe they would like to have some changes.. My good performances in IBU-cups in Jan were anyways a good baseline to get into the team!

Luckily they changed the program in Wolrd Cup so i got one more day to recover after ECH’s and illnes. It was a cheerful and awesome chance to compete on the hometracks. I haven’t been traing there so much this year, though. I prefer other places at the moment as I do hate the big uphills and that I couldn’t have any fair competition because of my skies.
You shouldn’t blame your skies, but cause the new fischer skies for this year have been really poor (not from Grossi to mention!:)) so there are barely one good pair for this kind of snow.

Anyways, I skied sprint, shoot more penalties than this year together. 2+1.- skied really bad and was so ashamed! I felt like a bambi on the ice. My zeroing was brilliant, prone perfect 49points, then a small loop and standing, 4 hits to the proneround and one 7. After that I may have got a bit nervous cause I lost the total focus to the shooting and also got shaken legs even before any upphills^^/

Nothing else to tell! It was a pity that I fell down so low, it meaned that I wouldn’t be in World Championships either! Now it’s been a lot of training, focusing for the next season definitively!!! Above all, I’m also participating last IBU-cup in Altenberg next week and after that it’s only finnish Champs both in xc and biathlon! Last week I was also helping the organizing committee in Kontiolahti Junior World Champs, working as a media assistent and also chaperone. A bit hard but it was also great to see my younger friends to succeed! Grattis Chardine! Onne Grete!

Thumbs up for the finnish team in World Championships in Ruhpolding. I think my little broo will succeed quite a well;) 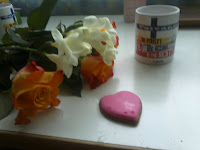 ps .Happy Valentine’s Day to all of my friends!!=) and Spasibo Anton, thanks for the nice cups.
” Be Fast, Be Accurate, Be the Best! – Laura”