What did I tell last time?.D since I wrote here last time had passed only 10 days.. but I’ve been ”working” and running around the clock since then so excuse me for late updating:) 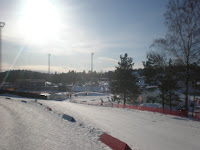 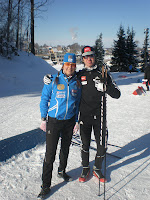 European Championships in Otepää ended with sprint and pursuit races in the lovely weather! Sunshine and minusgrades made me smile, although my own races were far away from satisfying level! In Sprint i got 1+1 penalties and ended up to the place 34.. my uncourageous skiing didn’t bring me up on the lists. But there were at least one good point in that race, the last loop was fastest and only there I could try a bit harder skiing^^’ you know, lactat can kill… 0_o

Anyways after three races I was already exhausted.. I was back to the hotel not earlier than 5pm. And what says our ”genious” teamleaders (Not my own coach!!) ”Everybody must be at the stadium for medalceremony at 7pm! wise move.. after race no time for rest, no finnish on the podium and outside -9!! great! And no other athletes from other countries there if not necessary!! I was refusing this foolish order but went with the others.. No wondering about the effects to Sunday! Other nice business from this armyleader. Come to knock our roomdoor at 7.30 am, when knowing we have a race in the afternoon..just saying ” oh girls did I wake you up? lunch starts at 11am.bye!.. ” If we had already known… Cause we didn’t have any properly teammeeting either! we just found out the facts ourselves!! And just finally to mention, our leaders didn’t understand a word in the teammeetings^^’ LOL. I just say a word: disaster.

So on Sunday we had pursuit. I just have the same speed all the races! you know.. I could have skied 10 races one after another without a pause^^’ anyways shooting was okey, except first standing! I thought I would be going to the place 11.. but they showed me the place 30!! last time they didn’t fill it.. so from this steep small downhill I had to break fast to the last place and I think that scrambled my mind. Summa summarum, at least I got a lot of experience in these competitions. What i needed most was my relaxed skiing! these 100 weeks in the freaking cold weather didn’t help either.. Anyways.. Now I’m on the road again:) unfortunately there are only few races left… 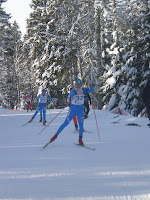 We left the city straight after pursuit so there were hardly no time for farewells.. pity! damn coaches! Luckily I saw a couple of mates here again in Kontiolahti World Cup..:) I missed some athlete’s party, though.)

that’s the next subject,) oh mann….