First of MAY and time to update I wrote last time… I meant of course March, but nevermind. It’s a day to count and live anyways. It’s not always the fair play for us. One misslucky movement with snowmobile and your life can end suddenly. So happened to my dear skier friend from Östersund. R.I.P Fredrik Karlsson.
– 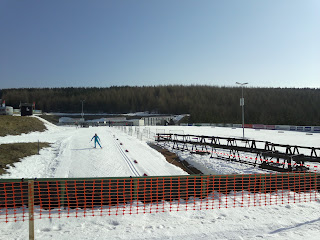 There have been a lot of things happening since I wrote.  It was just about time for the last IBU-cup in Altenberg. With a quick decision I finally ended up to take the final chance for competing this year abroad. Flights to Prague and the glorious hotel… You imagine, the finnish team in a hotel?!! How incredible!!:D Cause most of the time we are just somewhere there, you know, far away and stressing and cooking ourselves. That was great I think! Otherwise the races weren’t that glorious. The training days and awesome sunny weather turned out to a snowstorm or pouring rain + tricky wind during the racedays AND that put my mood down. Luckily I got my shooting back on the normal level in sprint race 0+1, but pursuit and individual race were both a bit poor with 6 penalties. I didn’t have either the fury on the skies, but I tried hard, maybe even too hard. The results seems to be on that level on the days I’m not at my best, but I’m looking forward already the next year! And thanks for the austrian team who helped me with waxing and the skies from Sven were also good=)

After the last-time-racing-this-year-farewells in Germany, through the grey landscapes with ugly factories to Prague I’ve been at home –  Just to participate to the Finnish Champs, both in cross-country and biathlon! Cross-Country relay didn’t go as we expected, mostly cause everyone was so pissed off even to be there. Our Champion wanted to ski the first leg classic, against all the previous thoughts, and our familiar biathlontrio stunned far away from the podium. (We were 3rd early in the season in Vuokatti!)

Then it was time for biathlon superweekend, 3 races and then off. I was doing pretty well individually! The relay team Kaisa, Sarkku and me were winning with the marginal of a half calender year..;) In Sprint I did really good, but unluckily just a bit too slowly… 0+0 shooting and 2 second from the 3rd! As there were no fight from the first 2 places (Kaisa and Mari) the lost to this rival was stupefying. In massstart I got 2 mistakes from the second windy stage and one from the last standing, otherwise it was a balanced performance to finish this 6 months racing period!!

The sunny and cold Finland has offered good possibilities to ski. STILL! and due to that I’ve been able to ski until last weekend. It was also great to seek my snowboard again and have fun and in the evening listening to one of my favourite artists, Kaija Koo, with my boyfriend. I would name it to the start of the Off-season and holidays. Gogogogo.

Next week we will fly to Germany and Köln. We’ll be visiting a friend of ours and the participating the hardest race ever I think, Strongmanrun im Nürburgring 5th of May. That’s gonna be funny and amazing I can guess. With other 11.000 runners there will be a lot of barriers before I’ve finished 22K :DD