A few weeks ago I was watching at first time the finnish baseball game here in Joensuu. Or not. I came into the thoughts that this has happened even before and it was maybe year of 2000!! I was participating the summer sportcamp for the kids, and in the end of camp we were cheering for the local baseball players on the field. At that time it was really hard to pick up only one sportart for the camp as I wanted to choose dancing, floorball, swimming, skiing and all the possibilities:D Anyways I took biathlon. Just for the reason that my big brother did and I was sleeping in the same tent with him. He had just started some biathlon training with the same coach who would be coaching at the ”trainingcamp” so it was an easy choice.:) I kind of fell in love in shooting with eko-rifles and the difficult combination of two different sportarts. Though, both were already familiar to me… somehow. 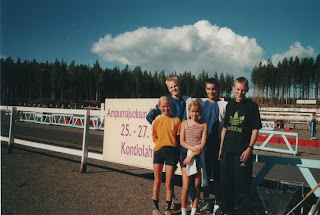 Next year I got my own secondhand rifle which actually worked well. I remember the scene of a warm summer evening before the first summer finnish champs when the head coach of finnish team Anatoly Khovantsev visited Kontiolahti stadium. I shot my first 50 points just at that time and it was surprising for him. Now over ten years later my super shooting will not amaze him anymore, he knows:D *gg*

So the year of 2001 was the first touch to the best wintersport ever! The fabulous trio of small devils (as we were called), Sarkku, Mari and me were invincible during the junior years. Our normal ”suits” of the summer champs were brilliant, we had all red heads and once we even ran the victory in socks. 😉

Back to the current moment it’s been a smoothy spring. First I was visiting the lovely city of Köln (Cologne). Strongmanrun in Nürburgring was just awesome even if it was cold and rainy day, but the spirit was impressive! And just to mention I beat our boys;) haha. They were complaining that my female figure made it easier to pass the track quicker… people got jammed before the barrels it was an hour before the boys got over the first barrel!!!

After Germany trip it’s been full focus in the trainings. This is the first whole year with my current coach and it seems to be brighter than ever I hope so! First weeks have been full of power training in the gym and then rest of the time mainly running 😛 Unfortunately I got sick in the beginning of June after the Abitur- celebrations and maybe due to awful weathers. It’s been mainly rainy and under +13 degrees. Good side of this is that you dont get burned or exhausted by the weather:D!! Positiv thinking remains…And now I’m fit again!:) 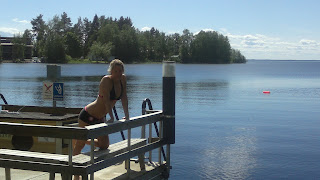 Our finnish Midsummer was calm and sunny. I ”celebrated” it by sunbathing and swimming in the lake. I was even baking a delicious strawberry cake so that our visiting friends will get the taste of summer:p

On this Sunday I will travel to Otepää, Estonia once again. 8th or 9th year in a row will be now. The sportclub team gets smaller all the time and this year I don’t have any of my age there as Sarianna will not be there anymore… Next year may be different then.

After two weeks in Estonia I’ll be at home and then in the end of August we head to Germany again where a friend of ours will have wedding in Hamburg. In case we take our car there I’ll be traveling with my boyfriend Sampsa down to Austria and train with the finnish A-team from 3rd to 13th od September!

So there are some goals to go. Now back to the track.. it means stretching:)

Enjoy the summer. See ya!