Happy Holidays afterwards, and so I’m already wishing happier new year 2012! Hopefully the bad things will stay in the passing year and the good things will follow to the next year!:)

That’s the wish from my side, I’m glad that this year is going to end soon and the new experiences are waiting for me… and everybody! Santa Claus didn’t visit us this year either but I was happy that he had brought also this year some nice presents!:D Headlamp and skibootdryers on the top of that. And my boyfriend got a book from his ”german”family: ”die spinnen, Die Finnen” so I think I’m going to read it at once!!:) Otherwise my Christmas went pretty much normally, including delicious eating, skiing and relaxing and this year even Christmaschurch on 25th! That’s because I spent first time ever my Christmas’ Eve somewhere else than by my parents’. i was by my bf’s parents so that was certainly something new! It’s nice and weird to see how Christmas’ Eve is celebrated elsewhere!

Anyways, what happened earlier in this month made me feel a bit down. As you know I traveled up to the Alps to participate IBU-cup races in Ridnaun and Obertilliach. For me they turned out to be a disaster which seems to nearly cut my season short. We spent the first 5 days in Obertilliach where we were able to acclimate to the higher altitude and also train properly on the nice 5K’s track! We got also more snow on the second day so it looked really nice after rain and darkness of the homeyards. 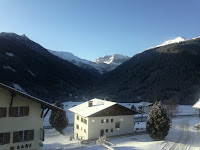 When we arrived to Ridnaun the problems started. A couple of us suffered from stomachproblems which affected more or less to the weekend’s competitions. It was also a bit strange to live in a small apartment, 7 of us. Sometimes it’s a small funny family and sometimes you wish you had some own space. On the raceday you try to be quiet while boys’re sleeping. You wish:D
First in the program was individual race and 15K in +2 cloudy weather. i was feeling lazy and My body didn’t have that much energy due to stomachproblems, so with 6 penalties and this skiing- you move nowhere. Head down and shoulders front, and shaking legs. Unsatisfied and sad.
In sprint however I managed to relax on the shootingrange and Igot a prefect shooting 0+0 at the first time since 2010. I felt a bit better than the previous day but it wasn’t enough to get any good placement. 51th was far away from the result I know I can with that shooting.

The next problem arrived on Monday, and got really worse on Wednesday after mixrelay! Lugninfection… You’re not welcome.!!! I still felt okey in my muscles on Wed so I decided to start. Also okey shooting sith 1 reservbullet in each shooting was good. I was quite fresh in skiing but my lugns were putting down the contract.. We end up to the place12th and we were happy to win Sweden and Switzerland:P

In this point of trip I ended up to the doctor and I didn’t start anymore due to sickness. I came back home and heard the lovely news. I will not be starting in the World Cup, nor in IBU-cup… That’s the result from the bad skiing, no matter the reasons to them, no matter if you were best woman in the sprint in Ridnaun, or sick. No excuses…
The fastest skier of us will ski World Cups in January, and the winner of the small national race here in Kontiolahti during December will have starts both in IBU-cups and finally in Antholz. And all these decisions I find a bit unfair, but You cannot do anything but ski faster. We don’t count shootingtimes or hitprocent, nope. Even if we were biathletes. but all this aftertalk is pointless and will only waste my precious time.

So it’s bittersweet to stay home now the whole January, skiing som xc-races perhaps and preparing to ECH’s in Brezno-osrblie… If they ever send anybody there! My boyfriend will fly with his friends to Thailand fo three weeks and Ahti is flying to Germany and World Cup already on Sunday! He had by the way missluck during the world Cup in December, broken skipoles and not-firing bullets etc. Hopefully you all will keep the thumbs up for him and wish him luck..!:) At least one of our family is on G!!;)

Now I’m off to swim in the lake and have a small run before that. Yesterday we had a big storm here and lot of people are still running without electricity! We had sun and snow this morning and I liked skiing and shooting in the hard wind… nearly perfectly;D So my spirit’s up. hopefully your thumbs too later in January..:)