Bin wieda mal in Finnland u es gibt seit 3 tage vü schnee! so super owa ich vermisse scho die Bergen, Ramsau u noch was…:)
Ja so was this introduction in german. It would be actually nice to write here in german, or swedish. But as most of my friends understand english so it’s better this way. The language that I cannot so good as the other ones..:P

Well, as most of you know we had a trainingcamp in Ramsau, in lovely Austria! In the program there was skiing on the glaciär/aufm Gletscher at the altitude of 2600 above the sea level! quite high, but stunning views and good tracks!:)) This year there was much more snow than the previous year, no black snow, only a bit icy tracks early in the morning! And who could believe I was waking up earlier than 7am just to get up to the gondol and to ski!:D But if you have been there even once, or seen some pics… it’s worth it!:) Sunshine and allt that.. Just so awesome. During 15 days when we were there I filled my ”mental”batteries for the coming season and these miserable/dark weathers here in Finland I’ll stand by this imagination, skiing in Ramsau:))

What comes to the weather, the first two days it was snowing up there, couldn’t see the track properly but the tracks weren’t icy at least and the skies were gliding all the way perfect^^’ the next 13 days it was just awesome sunshine:D that’s why i still look a bit like a pandabear:)
Down in the valley we had good conditions for training, on the rollerskies, running with poles, powertrainings etc. Even shorts were needed!!:) Grejjjt!

We did the hard trainings ”downstairs” and up there only quite easy.. someday higher lactat, some other day ” i believe i can fly!..:D (means excellent!) One rest day and two half days off we drove the program. Some guys of our finnish team were a bit sick during the last few days, but otherwise the camp succeeded pretty well I think. Also my little brother, first time there, was doing really great. Training with the ”big ones” without any problems.. I say beware, he’s fit for the JWCH’s!;)

I enjoyed the stay there, and actually wanted to stay there a bit longer…=) for that I had many reasons, but one of them was the chilly weather here in Finland! Since Wednesday there’s been snow on the ground!! oh well.. luckily today when I was skiing first time here in Kontiolahti at the cooled ski track it was a bit sunny.) Just to mention we have 3,5km’s track here, 60cm snow and world cup tracks ready for us, for russians and some other teams:)

4th of November we have the first qualification race in Vuokatti. The first and the last!! so early, but same for everone.. It’s the q-race for IBu-cup in Beitostölen, if you don’t get there you can forget the other races abroad as well during December! Tough game, isn’t it?
I’ll do my best, and if it’s not enough I just need to train more. This year we have only 3 places in WC, and 4 places in IBU-cup so the competition is hard!

But time for relax and sauna. Luckily our perfect hotel in Ramsau, Kobaldof, offered us finnish sauna every evening, swimming, golf and other stuff to get a good relaxation between and after the trainings:) Plus points go to Austrian biathlon A-kader, keeping me some company when I had a bit boring as the only finnish girl living in that hotel. I was also using my german, swedish and russian skills as the lifts were full of norwegians, and swedish biathlon and military teams were there as well. Germany biathlon teams joined us the second week, funny boys andi, simon etc:D As the canadians left the building and there came hundreds of russians I forgot my few french phrases and tried to speak some russian instead… Incredible but true, I managed some conversations:P 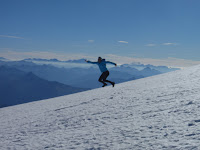 But now off… talk you later… in english.^^’)
training hard and waiting for the first biathlon races.. hopefully you too!?;)