Who didn’t understand my Swedish I just told I’m right now on the way to Helsinki and tomorrow I’m already in Austria and Obertilliach! I just finished my last snow camp this year. In the meanwhile, the biathloncirkus has arrived to my “hometown” Östersund!! So let’s but the thumbs up for my little brother Ahti and other Finns and fellows. J

Two weeks ago when I was training again in Vuokatti I got some company from our A-team girls; Kaisa, Mari and Sanna, as well as Ahti. We were also accompanied by the Austrian, Belarus, Ukraine etc.biathlon teams! So it was pure traffic jam going on there. Everybody tried to find desperately some snow and Vuokatti was one of the best places in whole Europe! Except Kontiolahti, Vuokatti has been the only place for my trainingcamps this year and actually it has worked pretty well! It’s a bit miserable that our B-team hasn’t had any trainingcamps after September if we just don’t count this Muonio snowcamp, where Sarianna was the only girl to arrive. I decided to stay nearer to home and train in Vuokatti, as did also Kaisa and co.

It was quite quiet now at this time in Vuokatti and I was able to train as planned on the excellent tracks! Over two weeks ago I got a phone call from the coach that I won’t be skiing in the first IBU-cup and World Cups. So it meant only that I get more time for training (which is actually an excellent choice for me after this “puzzle- autumn”).

I’ll fly now on Sunday to München and then straight to Obertilliach. After a couple of days training there we head to Ridnaun for the second IBU-cup this year! And as likely it’s going to be my first real races this season. I haven’t had such a hurry with the races. I will get them enough during the long season I think so.:D And we have to remember World Champs are just in March!! Due to our poor money situation in our biathlon federation we have to pay all of the costs from the next two weeks, getting only IBU-moneyaid to get this all through! Well, I’m actually used to it, cause two years ago it was all the same shit^^’)

The first races in Kontiolahti went pretty bad actually. On Saturday I shot my first ever jackpot (5penalties from standing) and felt over 4 minutes behind Olympic Winner Kuzmina. In the pursuit I managed to normalize my doings and gathered only 3 penalties, having one of the best individual times of the day. I just got my new riffle and due to its short magazines, I needed to buy a new rifle stock too! So it’s been more difficult to find my normal positions and things^/ 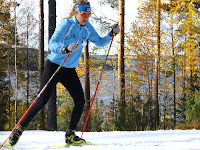 Now I’m off.J See you on the track, sooner or later. Arrivederci!!