I’m a bit late.
Olympic games were over before I even started to watch them properly. Luckily most of you have already forgotten the half of the gold medalists and I don’t even know half of them. Three names I appreciate most, the fastest Bolt, the magnificant Rudisha to make it look easy to run 800meters in 1.40(!) and the Decathlon hero Mr. Eaton. Of course I should mention him and her from every nation to flatter you all plus the finnish medalists but I’ll continue on the other way.

What comes to the finnish medalists they are at this moment the beloved heroes, but who will really remember the names after a decade? (Oh there was a shooter-gold-medalist in 2008) There are the medalists and then there are the loosers, the tourists and shame-on-you-guys in a row. The finnish sportjournalists have been really rude and un-professional blaming the none-medalists as tourists when they couldn’t made it to their best and over it. It’s been a lot of discussion about appreciation of athletes and their work and as well about how the limited resources will affect to the sport careers! If they have got through the limits to OG I think they are very seldom just the ”tourists”..But the discussion continues^^’

So after all this mess I’m not surprised at all that Kaisa felt so much pressure during the last WCH’s in Ruhpolding. The ”fear” of the sport journalists stabbing you in the back instantly if you will not get the medal… And so she shouldn’t read so much crap newspapers before the races

There is at least one thing to work for the future in the mental-training sessions… (Hjälp Christoph!)

I, myself, planned to write here already during the training camp in Estonia when I was even dreaming about the texts to be written. I got too busy when I got back home, though. I wanted to write about the holy circle of sporty life; training, sleeping and eating. It was so easy to focus on these things at the tr.camp but now when I’m back home it’s even complicated and hard to find time even to write this as my lazy ass is too tired^^) 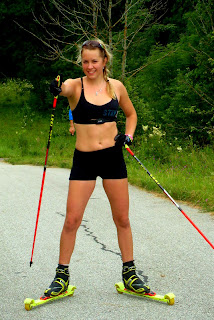 I’ll be writing about the holy triangle later, when I’m working on that theme in German to finish the final big task/course for the university and then becoming finally the Bachelor of Arts! So that will keep me busy when I’m not training, eating or taking a nap…

After the successful training camp in Otepää (except three days throwing-up everything^^/) I’m back at home and that will continue still a long time, I mean at least 5 days more:D  I have also been every weekend skiing up the hills or hiking in our nearest nationalpark, Koli, and it’s been hard and also pleasant (in the freaky way) when the blood is really running in your veins! One weird thing is that I’m kind of avoiding the trainings in Kontiolahti. I started to ”hate” that place after many unsuccessful races… But I’m working on it in my messy mind and I’ve been training there anyways!! HJÄLP Christoph! After the next month it will be already time for the first competitions I think.. and I want to show my progress!!!!

This summer is different cause I’ll not compete at all in any Finnish Summer Championships. The cross-races passed without I even remembered when I had been dancing 2 days with Armin van Buuren and co. in Summer Sound festivals in Helsinki. After that I stayed in Lahti by my coach and I really forgot the races far away in the north-west. 😀 (Congratulations will go to double-gold-medalist Mari!) 1st of September we’ll have rollerski-biathlon FM but I’ll miss it too. I’ll be with my boyfriend Sampsa in Hamburg and celebrate the daughter of my bf’s ex-host family getting married. (simple?.D) So instead of climbing up the wall-uphill I’m wearing a long royal blue dress and having an easy and hopefully warm week in Germany! 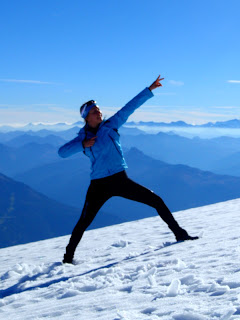 Finland is offering at the moment a nice autumn weather with +12 c degrees and rain once in a while. At least there are no problems with heat and recovering, or eager to sunbath… 😛 Now I’ll finish for this time and get jealous when Sweden, France, Austrian, Russian and Finland A-teams will enjoy the perfect days in Obertilliach;) I had to cancel my ”trip” there cause it would have been too complicated to drive there from Hamburg and also too expensive for my wallet. Instead I’ll be maybe in Ramsau in the beginning of October, and that will do it : ) Joy, joy, joy…Toi, toi, toi…

PS. Thank you all for your nice birthday wishes:)  kiitos, tack, spasibo, danke..