It was bittersweet to write about staying home last time, but I was yelling too early!! Just in the same late evening I got call that I could be participating both the IBU-cups, replacing Sarianna. And after thinking a while and discussing with my coach I was already packing for the next journey!:) I prefered getting more races (cause it goes better and better all the time) than staying at home alone, when my both beloved men are also abroad!

So off we go back to the Alps. First to Italy and Forni Avoltri and next week at the highest high Haute-Maurienne! Well, as you know the finnish team, we have our own tiny accommodation, with own cars, own cooking, only one waxman, no massages etc. That all brings a little advantage compared to the other teams and it’s a pity that you can’t give your total best although you should be showing your best results that you get into World Cup!

Well, I did my best, especially on the shooting range! Second individual race this year and I managed to drop all the 20 targets first time ever! so 0+0+0+0 and no penaltyminutes so I was really happy to reach top 20! Though, there were also top 10 available…I lost 4 minutes to the french leader, mostly because fresh snow and my bad skies, but you can do nothing. The next day was even worse, my skiing was a bit more alert on the track but the skies were worse. I lost in this sprint over 4 minutes with only 1 standing penalty!! How fair, isn’t it…

So after this week in Italy, living in a small apartment and having a very distracting atmosphere among us we continued a long journey to France! A lovely sun and perfect hard tracks were waiting for us. I was also accompanied by Sarianna (luckily and finally) so that there was more relieved atmosphere and I also got somebody (again) to sleep next to:D 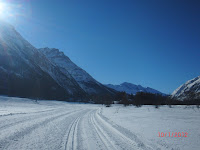 Anyways, I did good job also there! I did an excellent hard classic training before the races on that high 1700 meters above the sealevel. And so I got a bit better glide for the first sprint and with perfect fast shooting on the range I ended up to the place 30! With my hurting spine and back I was still able to get the strong last loop, as I was a bit scared to give full blast on the first loop at that altitude. Anyways, feeling relieved. Good job and the better way to go:)

Pursuit race I started just behind one of the twin Hildebrands, just to notice they are not so fast as I had imagined.*grins* 😀 But the chilly day -15c in the morning was bit hard to start fast, as well as humidity was somewhere around 20%. Nirsknarsk says the skies.:D But without a small mistake in the prone my total shootingprocent during January would have been pure 100%!!!:))
In the first standing I was standing too long time and I lost crusial 3 hits. Anyways, total 5 penalties is too much and already tired body was happy to get back home! 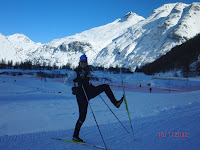 So not bad two weeks for a ”reservathlete”!! Shooting is brilliant, and I hope now after a few massages and good hometraining I’m able to give the best results in European Championships in Slovakia, Brezno-Osrblie. I’ll be the only girl from Finland (!!!) and I’ll travel there with two boys, without any coach or waxman! Our A-team headcoach promised something like co-operation with Austrians but who knows. I think some help is needed 0_o

After the ECH’s week I’ll be back at home, preparing for World Cup in Kontiolahti. Dunno yet if I’ll be skiing, I wish so. BUT in case my face is not enough for the team I’ll be the chief of attachees and chaperone, maybe even translator for the Teamcaptainmeetings. Anyways, I’ll be there!!

Now I head to the gym. It’s bit odd to sleep and train at home all alone. Yesterday evening I went to solarium and bought a fresh pineapple, just imagining I was laying on the beach of Koh Tao (Thailand) next to my boyfriend and chilling… It was only just a dream!