The first snow was falling down already a long time ago, but today it’s been snowing hardly. The trees are white, and the ground has over 20cms snow! Feels like Christmas!!:)) Well, my afternoon training didn’t go so well cause my classic skies getting 10cm snow to the point where the stopperwax should be!:D Nice..

Last weekend we had very easy week with the trainings. My coach was at home in Moscow, so we had to survive here without his controlling eyes^^’ well, it didn’t really matter cause the amount of training did not astonish.D In a meanwhile I wanted to make ” holidays” somewhere in the south, well at this point in Austria.. But wishes didn’t came true and I stayed here in Joensuu studying Russian and Swedish. I don’t find any big motivation towards my studies, though. I’m too lazy to start and I’m more likely to sit here in front of the computer than opening my books!! oops. Skype is good. But I’m getting more and more confused when I’m using many languages at the same time! So seems like I’m not charging to Russian.. maybe.D

What comes to studies I’m trying to avoid big school groups and lessons nowadays( for a good reason, though!:D). The H1N1 -virus is spreading also here in Eastern Finland.. And now when having only 4 days to the season start it would be horrible to get that high fever and so on. Although it would not kill me. who knows!^^’ So on Saturday the season starts with an unofficial race here in Kontiolahti. Week after that there are GP-races in Kontiolahti and I’m hoping to see more nations than at this weekend. Russian, Belarus, Slovakian and some other groups are training here, so would be nice to see if Domracheva has got more speed during two months. In Oberhof in the end of September she didn’t make an effort.. Losing minutes to Neuner! And that’s a lot! 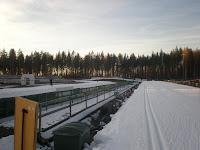 Seems like many teams are now training in Lappland and Scandinavian. Well, our team decided (just) to stay here. That wasn’t a surprise, though. We have 5kms good track, having all the tracks what come to World Cup in March. It is only a little bit boring to ski here all the time. Missing some friends;_; But I won’t say a word aloud. I was allowed to train over three weeks abroad… so I’m already satisfied!! More than last year anyways!!:D Now I would like to be somewhere in western neighborcountries. Why an earth it has to be so long way over the ”waters”… pity. Saknar till Sverige!

Anyways after two weeks I’m in Sweden!! It will be lovely… Long time, no see. And now even the coach let me go! And thus far I haven’t had any big problems with health so that shouldn’t be a problem:) yeop. Hope too see…:)) Idre and IBU-cup. here we come. From there to Östersund.. would be a dream. But it’s not time to think about it! 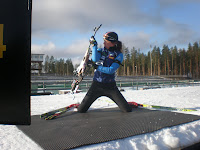 Now back to the business^^’ stretching and a cup of tea. It’s nice to see so much white utside. aww.

I’ll update after the first races:)