So back to the story:)) or fairytale..

Well, I arrived to Östersund early in the evening, and stayed by a biathlonfriend until my friend who had been in x-c SM in Skellefteå would arrive to the city:) Anyways, early in the next morning I was supposed to head to Lima, 340kms south from Östersund. Swedish Champs in Biathlon! Luckily I didn’t need to drive by myself!:) (Would have been cheaper, though. Got parkingfees 2x 600kronor (60euros) Nice?:DD) In the end I got an excellent accommodation in a very cheap price, thanking Erik Gradin very much!!:)
So we had sprint and pursuit in the program! the weather was nice and sunny and there were nearly 20 of women on the startline!:) In Finnish Champs we hardly had 15th! so how did it go for the finnish champion?:D well, I lost over 3 minutes to the top.. Okey, ACO and Helena Jonsson were so much ahead of others! with clear shootin ACO won 40sec before Helena, then there were a gap like 2 minutes before the third woman Anna-Maria Nilsson! I was 11th, with two misses in the standing. It was tuff battle from 3rd place to 12th!! a bit over a minute..not bad!:) I was waiting for the pursuit to be interesting.. climbing up the ”murderhill” 5 times would ”kill” anybody”:D 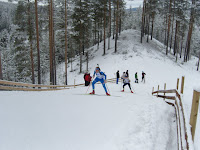 Anyways, I didn’t get this chance.. The arrangers wanted me to start together with ACO (in the guestclass!) so that was that. I hanged with Aco.. a while *grinning* then I got company from Helena in the first and 2nd shooting.. ( I shot clean, Helena missed one!:D) but after that I started to gather penalties. twice from second prone and first standing.. so I barely saw anybody on the track. Anyways last shooting clean, and I could ski to the finish as 3rd..:) The tracks were tuffer in pursuit as the sun smleting the snow, and all the upphills were like playing swampsocker!:D Comparing to the other girls I would have been 7th.. What is in the end quite good:) So that was the last race of this season if I don’t get a huge eager to race after one week in Kontiolahti…
I stayed one night in Lima, standing in the rain next day cheering up the others:D Then we horried up to Östersund where the season’s best race and afterski was waiting for us!.D Unlucklily we missed the down-hillrace (with Redbull and Jägermeister) but the big dinner was in the evening!! nearly 100 x-c skier and biathletes gathered together in a secret place to eat a nice dinner, then heading to the city.. afterparty:D I would say, really awesome evening!! And I did see many of my friends..:)) and met also some news! Thanks New Sweden Team for arranging this geniuos happening!.)
The day after I was skiing.. enthusiastic!! Was so awesome to be back in the city and ski on the stadium:)) Hopefully I’ll be skiing here again soon.. At least in December in biathlon WC:))
Anyways I spent the evening by a dinner with my friends.. Then heading to Åre, the best skicentrum in Sweden(?).D I got invitation a day earlier, and without thinking more I wanted to join this miscellaneous group I hardly knew…(I’m not shy ^^D)! Anyways, it was really fun.. ! Living in the luxorious hotel on the top of hill, in a suite! Spa and afterski.. lot of people and marvellous breakfast, for free!!:D eh. Not bad, isn’t it?:)) 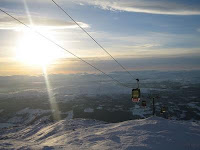 Next morning the prefect weather, clear blue sky and -2! A nice skitrip in Åre.. then returning back to Östersund:)) This is it! I just say, what a trip.. spontanious, hilarious.. And I have still two days to go!!:))) I don’t want to go back to rainy Finland, where all snow has nearly disappeared and the boring schoolstuff is waiting for me..^^’
I really have to book a flight to somewhere warm or south after 1st of May:D Before that it’s impossible cause of school and univesity celebration… eh.D Okey, We’ll see… Now I’ll enjoy the last days in lovely Sweden..:)
Adjö!.)
0saves
Save
If you enjoyed this post, please consider leaving a comment or subscribing to the RSS feed to have future articles delivered to your feed reader.