Last time when I wrote I had just arrived home. It seemed that the 4-hours traintrip was too much for me^^I got ill just two days after being at home! So the traininghours have been just above 5 hours the previous two weeks. Altough, my sportclub wanted me to the startline in cross-biathlon finnish champs.. on the other side of the Finland!! I didn’t like it, but as I had a little bit better feeling in my body I jumped into the car and sat there 6 hours^^’ cool..0_o

Anyway there we were, running in the extremely hot weather!! +30 at least.. competing in that temperature is just pure torture^^
But above all distracting things I managed to do my best.. what I just could imagine after all:)
I shot awesome 0+0 in sprint, ending up only 5 seconds behind my dear and best changeller Sarianna. My running was pretty good considering the fact I had barely done anything during the previous week!! So I don’t need to worry…
As usually we two girls are always making the best ”fight” on the track:P Next year we make our own races here in Kontiolahti, others can join if wanted^^’)
My little brother is in an excellent shape, ending up to the 2nd place with 3 penalties! good run and only 5 seconds to the winner.. pity that he can’t shoot like his sister;)

In the individual competition, I felt like playing swampsocker!! the ground was soft, and the sun was turning the muscles lazy and tired.. even before the start!:D Anyways, once again I managed to fight my way to the podium.. 2+1+0+0 penalties garanteed the second place, just 30 seconds after the winner.. not bad at all! And the feeling with running was horrible, but still enough!:o surprising.. ridiculous^^’
the last day we had relays, everybody feeling pain in the muscles.. oh well. Three starts within 3 days is quite much! but with 3 silver medals I could come back home smiling a bit, knowing that I’m on the right way! 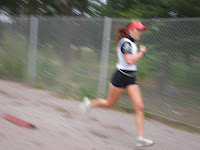 Our traningcamp in Otepää included also two races.. there we started the running season and now we ended it. Dunno If I find some 800meters race that could fit in my timetable, but otherwise.. no official running races anymore!:D

Now we start a trainingcamp here in Kontiolahti. After three weeks we’ll have finnish champs in Rollerski-biathlon.. I’m really looking forward to them! As they are the competitions what effects on the program in September! If I’m in good shape we’ll go to Oberhof summer World Championships .. After that I’m perhaps again training with A-team in Ramsau and Austria! Maybe!!!:) Hopefully.. But now it’s time to relax. Today I had a rest day.. in the lovely sunshine and +32 C degrees B)
Tomorrow I’m going to find a new bigger flat from Joensuu.. Then off we go to the trainings..

And as you could read between the lines.. I wont’ be coming to Östersund next week!! ^^// I’m very sad.. but my coach wants me to be here and train, cause I missed quite a lot trainings during my illness^^/ but anyways.. I’ll be there soon..: ) I really want to my second home.. 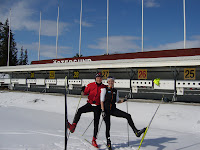 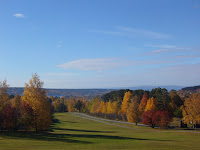 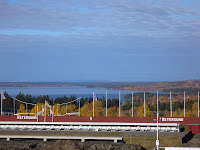 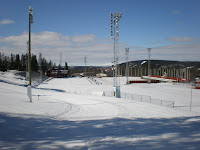