Last weekend we had a classmeeting in my hometown Polvijärvi, a small village with 5000 inhabitants and only 40km’s away from the big city Joensuu. Well, we were around 90 of us who were studying in the primary school the last three years 2000-2003. Now it was time to see some familiar faces, ca 40 of us.. long time, no see! A funny evening after all with a lot of laugh and interesting histories!:) I think the most ”awarded” person was my classmate, a husband and three kids (at the age of 23)! eh… I’ve a lot of to catch up!:D (I’m just 21y, though)..

Anyways the evening was long but nice… Celebrating in the local pub^^’ But from now on my job is to train hard.. It’s my summerjob, my all-year work and it’s my hobby and it’s my passion and 24 hours per day. Eh, dunno where is my husband and three kids (and a dog)?:D

So back to the business.. Only one doubt.. Our dear coach Anatoly will be staying in Russian next year and coaching the russian A-team. The reason for this change was after all, family! You know, sometimes there are bigger things than just sport.. like love for wife:) So I appreciate his decision and after all it’s not even making such a diffirence to our trainings. Actually it’s getting better!!!:) Anatoly will be still writing trainingprograms, and will be for example training with us in Otepää in July and later with me in Ramsau. Instead of this nobel man, we got three new coaches to compensate Anatoly! And I think it will be working perfectly!:) shooting coach and everything. So from this sudden fright and fear that I’ll end up coachless, turned out to be a jackpot!

I didn’t have any fear, though. I had already been thinking several oppoturnities, most of them linked to an exchange year abroad, moving to Austria or near by:)) (what a surprise!:P) And like usually things are always solved out somehow^^’ But it’s not my current though. Even if it would be more than great to make it true, rightaway!!:D supppa schen…

The first 3-weeks trainingcamp will begin next monday after this weekend’s celebration when the ”youngsters” are leaving the school with white hats and the others finishing other educations:) So I’ll be working as a waitress a whole day tomorrow, and maybe ending it with one drink at the city;) I just got the trainingprogram for the camp, and it will be tuff job to fulfill it! (with joy, however:))! so eh, thumbs up and off we go^^’

And you know, it’s only three weeks to go to Midsummer’s day, bright and sun all night along….;) 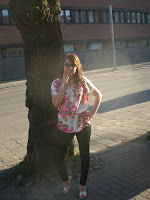