The sun is burning and the training goes on.. it’s +30c degrees outside and I’m melting down^^’
It’s been a while since I wrote last time, but it’s only a good sign, I’m been busy doing training, or just too lazy to sit inside in these lovely summerweathers!! 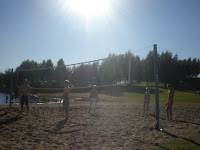 But to the latest news and happenings. July passed wuite quickly, three weeks trainingcamp was just enough to complete.. Some lovely restdays I was hanging out at the city with the friends, taking some tour to the circus (see the pics from FB) or watching the movies Sex and the City 2 or Twilight Eclipse. For that point I was very happy:) and we still had 4 days to go at the training camp when I had this disaster morning…

I was cykling towards the near by forest when I just was hit by car in the crossroads! Well, I saw the car, thought this 76-years old man would see me… but he didn’t. He came straight on me, behind the ”stop-signs”, turning to the right and hitting me to the left side^/ I flew to the engine bonnet and to the asfalt, just in a seconds! But i had so much luck at this time.. didn’t hit my head, nor broken bones.. only scratches and big bruises on my left leg (and damaged thigh^/)! Am I a catwoman or something? well, I ended up to the hospital for a day, an ambulance and two policecars taking care of me and my damaged bike. (they didn’t let me go home!!!) too bad, but luckily my doctor was young and handsome, so I cheered up a bit during the day…

Mm.. but 5cm more up and the oldie would have hit my thighbone’s upper end.. In this case I would not be running at the moment!!^/// grr…

So that was the lovely Tuesday! I got antibiotics, bandages and something else. At the middle of misummer’s week. Damn! I was not allowed to run or jump or drink or swim or Sauna!! so Midsummer’s day ”parties” i spent lovely at home, cleaning up and listening to the quit city.. Maybe it was only good physically! Mentally it’s very depressing not able to do the thing you love to! I tried rollerskies after a couple of days… a bit painful it was, though! Even I had good medicin..^^’

Anyways I’m back in the training right now! What happened two weeks ago, there are only this black bruises in my left leg.. otherwise I’m as stunning as always:D
I just came from Vuokatti where we had biathloncarnevals going on. There were also all the cross-country teams and a lot of ”skiing-people”:) Otherwise my weekend was kind of perfect, on Saturday we were sailing a bit, grilling, chilling.. etc:D I was also skiing in the grey tunnel^^’ -4 inside and +30 outside!! sounds even better, right?..:P

Now time for packing!! on Friday we head to hot Otepää.. coming back 26th of July. or dunno when I’m finally at home:))

Not so much time for rest anyways, as we have the cross-summerbiathlon Finnish Championships in Lahti 6th-8th of August.. then 15th-24 of August the B-team and junior-team will have a trainingcamp/IBU-rollerski biathloncup competitions in Östersund!!
Have a nice summertime!! getting tanned, yeah..:))