I love traveling. That’s my conclusion after being abroad over three weeks^^’ After the competitions in Germany we drove to Austria and the Alps!! For me who never has been in Austria.. only driven once in a while through it.. It’s awesome!:)

Well, I must admit. It would be a place worth of living.. some longer times:) Like my dear Östersund!! The landscapes are brilliant.. some mountains, not a big city life. Well, dunno if I would like it in a longer run but anyways:) The sun was shining most of the days so that we could do trainings in shorts!!! wow.. And in the meanwhile it was pouring rain and only a couple of plus degrees in Finland. eh, I was a bit glad to hear that:D

Two weeks passed very fast.. and once again I didn’t want to leave. (That’s not the first time, though) I could do many good skiing trainings up there.. at the glacier. 2700 meters above the sea. WOw.. I’ m sure I’ll come back next year!! if not earlier;)

Among the trainings I had one sponsormeeting and some other ”unofficial meetings”:)) I got thousand fancards.. eh so Who wants one card, me and riffle in the front, so just say:DD It’s just so ridiculous that I have such things^^’ I’m not so ”proffs” yet:)
So some shopping I did as well.. hats, jeans (totally too expensive, but i took them anyways:D) in Austria the shops are open only from 8 to 12 am.. then 2,5 hours ”rest” and then once again.. I found it a bit funny.. compared to Finland where shops are open nearly around the clock:D And well yea, In Austria the youngsters at the age of 16 are allowed to buy alcohol.. to vote at the same age.. then drive the car at their 17’s.. and buy whatever at the age of 18!!! unbelievable!:D

Anyways the trip there was sooo awesome:) there were also lot of other teams as canadians, russian, Austria biathlon teams and so on.. well, funny thing. I had a ”date” with a local boy.. one gorgeous biathlete:) And now it seems it could lead somewhere.. eh. dunno:)) these are always the questions… try or not to try.. I’ll try. Always when I feel like that..^^)

The season is coming soon. only 4 weeks and we’ll run the first races.. then who knows where I’ll end up. My goal is to qualify to IBU-cup first.. the maybe even Worldcup.. the season starts in Östersund!!! so all that would be more than awesome:)) we’ll see…

I arrived here to Joensuu on Sunday.. and it was freaking cold!!:D minus grades and snow.. compared to warm and lovely temperature in Ramsau:) but never mind. Now we can ski here in Kontiolahti at the cooled track.. 3,5kilometers!! well, feels quite nice. And above all my coach is more than happy to see me in the trainings here:D He was already worrying if I’m coming back at all,).. Well, it was near.. so near that I didn’t continue my trip to Barcelona for a few days…:)) Having a nice rest .. with this cute austrian boy:)) he would have even paid my flight.. but then well. I came back here for some reason 0_o. But no worries.. he’s maybe coming here for a trainingcamp next week:))

Next week I’ll do one exam in Swedish.. although, that should be a piece of cake.) On wednesday I’ll drive to Vuokatti to make some tests.. or a test..:) We’ll see if there has been some progress during the year.. It should be, anyways…^^’ 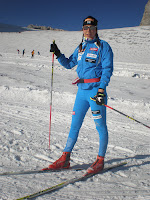