I spent our Independence day in a hotel room of Helsinki airport planning to be home after a week’s journey. After all what I had been thinking about before the trip turned out to be something very different..

The first world cup ever for me, place: Hochfilzen, time: 11th of December 2009, race; sprint 7,5km women. Oh dear, at the first sight everything there in this big circus seemed to be like the same as I’m used to see in Junior WorldChamps and in many other competitions. BUT somewhere in my little mind I made it absolutely too big! Well, that’s the excuse what I made myself of my abnormal performance on the shooting range and on the tracks.. and what comes to the weather.. well, you saw it. but It’s the same for everyone.. Others handle it only better than some others! So shame on me! Luckily I can only get better now, and there will be more oppoturnities, I’m sure!!:)

As Raphael Poiree said in IBU-cup athlete’s party: ”Don’t worry dear girl, I was also a total shit at the first time in WC! What you need is experience..” So he’s right, I hope:) Now head up and to the new races..

The relay in Hochfilzen went a bit better for me. no penalties, and that weather really was much more enjoyable:) At the weekend there were approximately 13 000 spectators per day. I refused to look at the crowd before start.. afterwards it was only funny to see so much people crowded to a tiny stadion:D so we were 16th in the relay. Pity, we can do better, but that was that day’s prestation.. maybe next time relayteam will be luckier!

After races in Hochfilzen I made a quick desicion to travel to Ibu-cup in Obertilliach. I just didn’t want to go home yet after such a week. I do like Austria.. so one week more in the Alps! yes, my pleasure. My german sponsor Manuel Steinbach drove me there (on the way to Pokljuka). The sun welcomed me to the town, such nice views!:)) I stayed in Obertilliach with four other finns coming straight from ibu-cup in Ridnaun. Well, I survived this week well.. Living together had also it’s ”other” sides, though.

What comes to the competitions, the sprint on Friday was a sign of better days on the shooting range, only one penalty. In a such cold day with -16c and high altitude I was a bit scared of skiing (too) fast so I didn’t get any good placement. In Pursuit I was nearly doing the normal-me, fortunately.) I got up 10 places with 3 penalties, and skiing past a japan girl on the last course;DD whoo, so place 36. After this race I can be comfortable with myself.. Getting better, and the goal is in March and European Champs..: ) Looking forward to go to Estonia!

I stayed in Obertilliach alone two more days by training and enjoying the sun and awesome landscapes.) Two hours skiing in the sunshine without taking the same track twice was sooo brilliant!! Only the minus grades getting below 15 were not good to my freezing toes^^ At least I had a peaceful time there. Missing some friend(s), though. 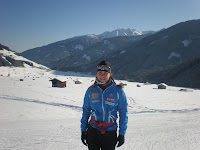 After leaving Obertilliach it took only two days to get home. At first the ride(with Steinbach) to München, and lunch in Salzburg took a half day. Then the flight to Copenhagen was late, and the another plane in Copenhagen never started. An engineproblem forced us to stay overnight in the airport hotel. Well at 3 am I was sleeping after waiting for 3 hours in a queue to the new check-in arrangements, then waiting 1 hour to get taxi who wants to take me and my skies in!!:DD Unbelievable..

Luckily I met one finnish girl on the flight and we could survive together from all this SAS shit. I met also one nice guy at the airport hotel, he helped us with the baggage.. and turned out to be a finnish personaltrainer- guy, only living in Schwitzerland! cool! what a coinsidence!:) Thanks Heidi and Tommi!! The journey without them would have been very miserable history…

So home for Christmas. I did it!:) Now it’s time for relaxing and some good traininghours here in Kontiolahti, not forgetting mum’s tasty christmasfood and all the family gathering together:)
Next races are after two weeks so a short break during the season is always welcomed:))
Gingerbread and glühwein.. mmms:P and It’s really snowing!! 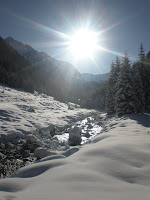